Siouxsie and the Banshees – The Scream, 1978 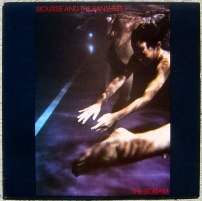 The Scream is the debut studio album by Siouxsie and the Banshees. Recorded in one week and mixed in three during August 1978, it was released on 13 November 1978 by record label Polydor.

Before the album’s release, the band had developed a strong reputation as a live act, and had achieved a Top 10 UK single with “Hong Kong Garden” (which did not appear on the original album).

In late 1977 and early 1978, Siouxsie and the Banshees received major press coverage but failed to secure a recording deal. John McKay had become the band’s guitarist in July 1977 (having Marco Pirroni (Adam & The Ants) and Sid Vicious on drums (Sex Pistols) during their debut performance at London’s 100 Club).
Most of the songs were co-written with McKay. Only “Carcass” dated from the band’s time with Peter Fenton, their guitarist from January to July 1977.

Several songs from The Scream had already been recorded on BBC Radio 1 for two John Peel sessions: “Mirage”, “Metal Postcard” and “Suburban Relapse” premiered in November 1977, and “Overground” and “Carcass” were aired three months later in February 1978.

The idea of the cover was Siouxsie’s.
Photographer Paul Wakefield met her and the band to discuss the project: “The idea was to shoot disquieting and unnerving images underwater in a swimming pool – you can’t scream underwater. I wanted to be able to completely control the lighting, and so an indoor pool was the only option…”

Upon release, The Scream was widely acclaimed by critics. It was also a commercial success, peaking at No. 12 in the UK Albums Chart.